Visiting a beast of an antenna

The reactors of Chernobyl produced so much power that the Soviet military diverted not a small part of electricity to run a pretty extraordinary device, that is 150 metres high and unbelievable 750 metres long. Its name is “Duga 3”, but the NATO called it woodpecker. What is being described as little sweet antenna that is so huge, that even the widest ultra wide angle cannot capture it.

With that thing the Russians could listen beyond the horizon, hence it could notice the start impulse of intercontinental, of course the ones on US-American soil. Except a trial period though the antenna was never really used. The soldiers needed to operate that super confidential thing lived in the forest, in a village called Chernobyl-2.

Chernobyl is a symbol for Soviet Union’s demise; a country, where at that time progressive-transparent forces collided with conservative- authoritarian structures the same way like atomic nucleuses clashed each other inside wrecked reactor number 4. Victims are children, no matter if unborn or alive as their cancer and congenital malformation rate rocketed up to heaven high. The exact extent of the catastrophe from a public health point of view is completely unknown since too many radiation related deaths got assigned to natural causes like heart attacks.

After all there are no lessons learnt though. Helmut Kohl kept on politically expanding nuclear power technology, so did France and Mrs. “Super”-Merkel needed yet another nuclear disaster, that is Fukushima, to restore something that existed already but got destroyed by her own CDU party, the nuclear power phase-out.

Well, to me West German CDU and their behaviour is nothing but yet another SED, the “pleasure” of East German Socialist Unity Party I had 25 years ago. I am only missing something like StaSi, but people in political power surely work on that too ;-)

Thematically back in Chernobyl again, we go to works canteen and through the contamination scanner. Every time that thing switches to green is pure relief to me. We enter the actual refectory. The hall roofing clangingly reflects a proper fart. Caught in the act the sheepishly smiling canteen lady throws everything she can find on my tray. Borscht, salad, pork chop with mashed potatoes and fried curd with heaps of syrup are on the menu today.

My question if I might take a photo of her in her canteen bounces off like a rubber ball from the Berlin Wall: unanswered and with a facial expression killing everything being alive around. Like said before, taking photos of people inside the exclusion zone is everything but easy…

The radioactive cloud that escaped though, ravaged whole Europe, making Chernobyl becoming a part of each of us, even the unborn. Personally I am thanking all people who helped to contain the catastrophe, no matter if commanded or voluntary. You were instrumental in making the much larger part of Chernobyl’s fission products staying where they have to stay, that is inside the rusty sarcophagus in northern Ukraine. 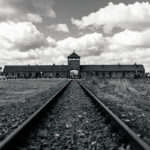