The quiet place where the storks are spending their winter vacation is so much more busy and hectic for us humans. Framed by the snow covered peaks of High Atlas while being riddled with exotic palm trees; that is the way how Morocco’s most known city is presenting itself. Marrakech, a place where you can bring your senses into closest contact with the Orient and its clichés.

To visit the southern metropolis takes you three hours by train from Casablanca. Same like in Fès, Marrakech has a million inhabitants as well, spread out across new town (Ville Nouvelle) and the historic Medina. The center always was, is and will ever be the worldwide known juggler square, locally called Djemaa el-Fna. Every evening anew the show starts again, regardless if it’s a normal week or weekend day. The hustle and bustle has surely a strong touristic background, but is also an integral part of the local culture. While walking around and curiously watching story tellers, snake charmers and Henna painters, it only takes a glimpse and you have a lice ridden, mini skirt wearing Barbary ape on your shoulder, whose master already shot off his 10 Dirham claim before the ape jumped on your shoulder.

The whole situation is only interrupted by the uncoordinated lute whinging of the snake charmers, whose rolled up reptile main attraction literally seems to wait under a round wooden cover. Once that cap is taken away, the snake head pops up mechanically. Like the snake is surrounded by strange lute sounds, your nose is surrounded by something as well: a very special and unforgettable “fragrance” of sweet patchouli fumes merging into food smell and the malodour of donkey pooh.

Yes, food smell… At evening and night time the square becomes a big open air restaurant. Center of that outdoor cuisine are the countless stalls advertising their different kebabs, sujuk, chicken and couscous dishes. While tourists often prefer having grilled stuff, locals like to enjoy gastronomic specialties like boiled wether head, respectively its white inner. Shortly after biting into perfectly grilled lamb you’ll suddenly find yourself in huge wads of smoke, as dense as London fog. The crew of Hassan’s barbecue stall, stall #29, seems as if they want to burn down the whole square… The flames are dancing almost one meter above the grill coal and are giving the meat a last hot kiss before it is disappearing in hungry mouths.

Once Hassan managed to put a bridle on the fire’s tongue and to calm down the hectic atmosphere until next fire escapade, you’ll hear the shouts of snail soup master chef Ismail. His harangue-like verbal adverts however still have to fight against the general babble of voices. Though you clearly notice the fissling jingling of snail houses falling into small cups, when he’s swinging the ladle again to let another soup portion go over the counter. The price of that show is definitely steep; you easily pay the double, sometimes even the triple of what you would have paid when eating in the nearby alleys of the medina. Or the other way round: you just don’t get much for your money. Only some seconds after 130 Dirhams left your wallet to pay the food you’ll hear yet another “Excuse me!” call. This time it’s the juice seller Mohamed, while standing between huge piles of oranges he’s quicker thrusting an orange juice right into your hand than you can say Yes or No.

Being reinvigorated in such a manner assailing the southern bank of the square is not a problem anymore. While the northern Djemaa el-Fna is dominated by the brightly lit boutiques of the souk, the South is the actual playground of the jugglers. Here drummers are giving the rhythmic orientation for belly dancers to set the crowd on fire with their feeling for African tribal music. Photographers and hobby video filmmakers rarely remain undetected. Often it doesn’t take longer than half a minute and you’re asked for a donation. For those people having longer pockets and shorter arms than Scottish bank association the magic of the moment is suddenly over; the human chain closes and you’ll be shut off from all things. Generous and friendly people can see and take as much photos as they want though. You can watch this waving mass of people best from the balconies of the square surrounding restaurants, for example from Café Glacier.

[evp_embed_video url=”/wp-content/gallery/20080410_Marrakech/Djemaa-elFna-Music.flv”
At daytime the bazaars are dominating the Old Town. The closer you’re to getting to Djemaa el-Fna square, the higher are prices, the more you will have to be charmingly bargain when buying something. The basic rule: deduct 60% from the original price and the let’s see… The best way to start a Marrakech day is to enjoy one or two crêpes and a fresh-squeezed orange juice. That is the perfect basis to start from if you’re about bringing yourself in touch with the real Marrakechi life, their life happening beside the touristic main stream. Another non-touristic thing is having a stroll through the Jewish quarter and its souk, which is close to Palais al-Badi. There you can buy the best coffee by far, cheap spices of high quality and the highly considered Argan oil. Not far from that souk you can find the workshops of the lantern makers. Those masters of fine copperplate engravings and colourful glass are however under surveillance. Above them, on the walls of Palais al-Badi lots of white storks are nesting or waiting for convenient upwinds while watching what the humans are doing down there.

Finding Marrakech’s true gems is a hard task. In the palaces you won’t find real beauty, but the medersas and private riads are a different story. There you can see alive culture and fine architecture while for example Palais al-Badi is more or less a meaningless ruin. As mentioned before, the souks play an important role in daily life as well. Due to high tourist count the northern souks are pricey, better furnished but less natural. In those waters Faux Guides, the fake city guides, are fishing for victims. When making use of their service, you actually will always end up in a collaborating shop, where the pressure to buy something can become extremely high. Sometimes that even results in people trying to insult you, even by words like “Fuck you Nazi!”. Just keep cool, ignore them and go…

Marrakech’s new town is apparently western-minded and not really interesting for all fans of the real Orient. Meanwhile it’s no problem to meet poisons like KFC or McDonalds when strolling through the roads. And in the shop next door the trendiest Swedish underwear is going over the counter. In comparison to Fès Marrakech’s medina is much more lively, but also noticeable more touristy. Getting lost is possible as well, but not that quick and final as in Fès. But, the Old Town of Morocco’s royal city #1 seems to be a magnet for several poor people as well. People begging for alms are concentrating in the alleys of the medina. The calls for charitable gifts and the promoters in the souks can quickly result in running the gauntlet and causing some paranoia.

Of course beside all things called Arabic-North African way of life, you can watch the “one or other” sight. Seeing them also means to have a swim in the touristic main stream among Americans, French & Co. The nicer places of interest are: Koutoubia mosque, the Saadian tombs, the Medersa Ben Youssef as well as the Palais al-Bahia and al-Badi plus the magic Jardin Majorelle. 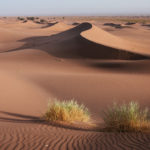 Sand Blasted – The desert of Morocco 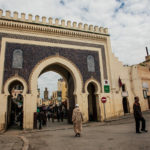 The spiritual Dignity of Fes