The Bird Island Nature Reserve is offshore Lamberts Bay, a fishing town at the west coast of South Africa. It is home to a small but lovely colony of a beautiful seabird, the Cape gannet.

I come from Namibia now – from the big dunes of Namib desert – and stop at Lamberts Bay. When sleeping in a roof tent, then sleeping rhythm quickly adjusts to the cycle of the sun. And that’s exactly how it is this morning. Somehow, again, I am broad awake before sunrise. Hence I don’t bother myself for too long and pay the Cape gannet colony an early visit, also because of the brilliant light conditions at the moment.

A year ago in New Zealand I could spend three days with those birds. Here in South Africa access and observation possibilities in Lamberts Bay are much more restrictive. And even if I would like to be closer, keeping people away is a good thing. The Lamberts Bay Cape gannet colony has been brought to the edge of existence quite a few times. Sometimes due to domestic cats, sometimes due to fur seals, but very often because of humans. We, the self-proclaimed crown of creation, disturbed the colony for example by mining guano.

On the way to the offshore rock of Bird Island Nature Reserve I immediately notice the high density of seabirds. Also the diversity of the species is occurring amazing. I’ve rarely seen so many animals at once! Every square centimetre is occupied. All things called space are like in Berlin’s infamrous TXL bus; after the weekend arrival of usual Ryanair alcohol tourism madness. Thousands of cormorants sit on the roofs of the local fishing industry and warm up their plumage. They are waiting to start into the day.

Sitting on the offshore rocks outside the Lamberts Bay rock, hundreds of coastal and Artic terns join the seabird army. These little guys breed in the North Polar region and spend the winter at the South Pole. Meaning they cover a distance of 30.000 km of flying. That’s almost once around the entire planet. Every year anew they do this trip! The details distinguishing the different coastal tern species are homoeopathically small. And even the Cape gannet is difficult to distinguish from its Australasian counterpart.

The sound of the fledglings

It is simply magical to see the Cape gannets flying out to sea in small groups, or back to the colony. This hustle and bustle is simply timeless. In addition, there is their landing manoeuvre, when the gannets drop clumsily to the ground. Just like at Cape Kidnappers in New Zealand, the gannets from Lamberts Bay have also committed themselves to a runway area. And just like on the other side of the world, many young birds can be seen. The strong moult, their dark skin and the downy plumage reveal them.

One perceives the small Cape gannet fledglings however also acoustically. The “pumping” of their lungs paired with a cheeping resembles the sound of a cooling aggregate. Or an old, unmistakably crooked V-belt of a Soviet Icarus bus. Nevertheless, this sound is so individual that the adult bird knows where to land to find its offspring. The elder hunt food they find abundantly in the Benguela Current.

This cold ocean current and its food transport reaches far into the north of western Africa. Not only the Cape gannets benefit from it, but also the seals at Cape Cross. Finally, this Atlantic current is even responsible for the development of Namib Desert. The water may have only 15 degrees, but in the direct sun, the sky doesn’t even show a single cloud, it gets much hotter, making the air in the hide-away becoming stuffy. My stomach rebels, wants food as well. Hence I leave these lovely little guys towards breakfast and later Cape Town. 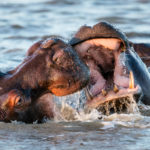 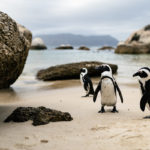