Already last year I made it into the final of Golden Turtle photo competition, that is part of Russia’s largest eco-cultural project. This year I even got honoured while the image is now part of an exhibition at Manege (Манеж) being located directly next to Kremlin. Yet alone the divine dispensation called tailwind made me arriving Moscow on time and not facing the desaster of missing the final ceremony as Eurowings (former Germanwings) was again delayed… 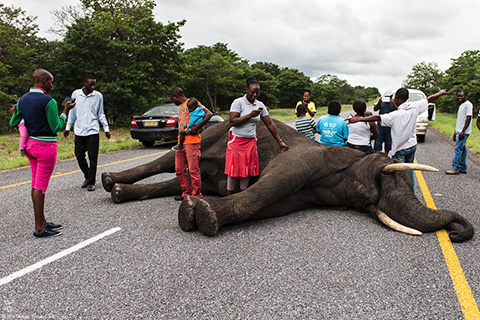 The Story of the Photo

That morning I drove from Kasane to Ngoma through Chobe National Park. The sky’s azure had no chance to peep through thick leaden-blue clouds. Already from far away I spotted a huge dark pile lying on the road and was hoping that pile is not what I thought it is in the first moment. My initial impression was unfortunately right though. It was a dead elephant and I was the second on site. It didn’t take much time and the first minibus stopped and locals gathered around the dead giant. It was very interesting to see that even for Africans the fallen elephant was something special as for the locals elephants are surely as normal as dogs or cattle is for us Europeans; in particular at the elephant paradise Chobe NP. Though I was puzzled to witness how the western egocentric selfie plague took over, what factually vulgarised the animal. Transporting that scene entirely into the world of humans, then you don’t see people taking selfies for sheer showmanship purposes at an open coffin as well. The animal suffered a natural death assured the rangers.

Honoured in “Human and Nature” category

To date I participated in photo competitions only two times. Last year my work got exhibited and this year my photo “Africa meets Facebook” even got honoured in Golden Turtle photo competition 2015 in “Human and Nature” category. Of course I am super happy and thrilled about my work being even capable to convince even an expert panel. In the first place though I participated to build a cultural bridge between Germany and Russia, between two European neighbours, even if it’s only a small bridge. My photograph is part of an exhibition shown at venerable Manege (Манеж), one of Moscow’s most important culture and exhibition halls, right in front of the Kremlin. Quite awesome!

Starting at Manege the exhibition will travel and stop at the most important Russian cities. Of course I didn’t hesitate flying to Moscow, where again I have a splendid and intensive weekend, thanks to Victor Boyko, Swetlana & Aleksandr, Ksenia Vorozheykina, Dmitry Rogoshkin, Alexander Myaskov and the new acquaintances of Barbara Dall’Angelo and Martin Siering.

Germany, actually the country of poets and thinkers as well as top-notch engineering achievements. That time is over, as disasters like the Berlin-Brandenburg airport reveal. Another contributor to that quality problem is Eurowings, the former Germanwings. Quite some time before having taken off I bet that Eurowings will be late. Unfortunately I was right. Why? Because Eurowing’s delays are predictable as its flight schedule, in particular its slack times being out of touch with reality, got optimised to death. Fortunately I know Moscow quite well as otherwise Eurowings would have made me missing the final ceremony. And the quite delayed flight back to Berlin, well, we were pretty lucky that we didn’t get redirected to far away Schönefeld airport as Tegel airport luckily accepted us only a few minutes before daily curfew takes effect.


Eurowing’s delays are neither coincidences nor isolated incidents. They are produced systematically by an airline that’s consequently putting blame and efforts on its customers. Deutsche Bahn has to compensate already when one of their trains is 60 minutes late, but airlines such as Eurowings are allowed to screw up things as bad as they can if they don’t exceed the 3 hour deadline. The dry sandwich you get aboard reflects the quality of Eurowings quite well. Sometimes you even have to claim it as the list of smart tariff flying passengers is incorrect. An evidence of incapacity, a sad spectacle that I definitely don’t want a second time, hence my first and last Eurowings flight ever.

75 Years – 75 Memorials – Stage 6: Seelow Heights and the Soviet memorials at the gate to Berlin