Whether in terms of high water or emotions, thus far 2010 was a literally overflowing year for the Polish people. Fortunately the big flood has gone, the dikes framing Vistula River aren’t huffing and puffing anymore and also the beavers can breathe a sigh of relief, as this time they surely can’t be blamed for the waves (of visitors) flooding the area around Płock. Fifth edition of Audioriver Festival saw two novelties: on the one hand, Miami’s WMC is saying Hello, a convention for music industry got involved, while on the other hand with Richie Hawtin and Hybrid two protagonists already performing in the previous years could have been won to play a second time. Active support came from top notch artists like Laurent Garnier, Way Out West, The Deep Modern Left Quartet or DJs like Karotte, Christian Smith and many others.

Somehow it seemed as if the mass of British acts brought along their island weather like a small cartoon cloud that floats right above you and rains down on your head. While last year was about swimsuits, the 2010 weather demand a cardigan, as the flaming June summer temperatures somehow took a time out and Central Europe as well as the area around Płock-based Audioriver Festival became a foggy fridge instead a hotspot of lightly dressed people.

The Brits seem to like it four-legged, whether it’s Three Kittys Lions or a black, malevolent and baneful creature that has its roots deep deep in British folk religion: The Black Dog. Identically named men hailing from Sheffield, Great Britain’s Detroit, have been producing electronic music for years and are widely known for their work in the field of ambient techno, for example for their brain melting album Music For Real Airports.

Their gig was the opening act for everything happening on the main stage. Saint Peter seemed to like their everything but beat-less selection of crispy deep house and melodic techno tunes, as he swept away the clouds and the star-spangled night sky smiled down on us while the two Sheffielders took us on a ride through their wibbly wobbly world of techno.

Nick Warren and Jody Wisternoff, worldwide known as Way Out West, are the men behind Audioriver’s biggest flashback to date. Honestly, I was a bit sceptical since I was always missing something in the live sets/MP3s that are downloadable from the internet.

However, Nick and Jody set the whole place on fire and delighted us with classics such as Ajare, Domination, Killa and The Fall; even the Hybrid boys, already waiting in the wings for their gig, couldn’t resist dancing. Nick & Jody tied up the audience and in particular their masterpiece The Gift shrouded the whole festival site and Vistula River in magic. They were visibly delighted to be playing their first Way Out West gig on Polish soil.

If someone back in the day had claimed that Chris Healing’s and Mike Truman’s gig at Audioriver 2007 would be topped by their 2010 show, they surely would have been declared mad, claiming that electronic music just couldn’t be presented and played in a better way. Well, fiddlesticks…! With their new album Disappear Here and its corresponding live show, Hybrid raised the standards once more and redefined the meaning of Champions League of electronic music. They take you by the hand and transport you into deep, filigree and driving soundscapes. Of course the Hybrid boys have played live at the festival over and over again, involving live drums, guitar and vocals but I guess they need a third invitation to Audioriver to finally learn to pronounce Płock correctly. ;-)

The most emotional moment of their gig was definitely the reinterpretation of the classic Finished Symphony and many thousand dancing legs were internalising what Hybrid has always stood for: a sound that just doesn’t let you stand still. It is music with attention to detail, especially when it is about complex rhythms, full of captivating and extensive melodies without being overblown.

You should never draw conclusions between an artist’s productions and its DJ sets… Surprisingly I was concerned – the question in my mind: why Simian Mobile Disco were headliners and why for example they play at the Watergate… Well, DJ-wise they were by far the biggest surprise I’ve ever experienced. The atmosphere that has been created by The Black Dog, Way Out West and Hybrid got unloaded when James and James put the digital needle on their records. Like an explosion of energy, the whole main stage area was suddenly cheering, chanting and literally raving. Their sound was far away from the homogenic electro uniformed pulp I was expecting. Simian Mobile Disco was pure ecstatic rave!

The first of the bouquet of international DJ heavyweights playing at the techno tent (Circus Arena) was Brasilian-by-choice Christian Smith, who is widely known for his prolific musical liaison with John Selway. Chris Liebing already had an eye on Smith’s dynamic DJ sets that are influenced by progressive beat structures and slightly industrial sound snippets. The atmosphere at the techno tent is always great and Smith easily turned the Circus Arena into a boiling pot.

When living in Berlin, you don’t need to drive to Poland to listen to BPitch Control stuff. According to friends’ reports Ellen Allien delighted their fans, but things got more interesting when Germany’s coolest ex-chimney sweeper took over the decks: Karotte. The Cocoon resident is a DJ like a DJ should be: sensing the right tune at the right time, energetic, music loving and expressing his joy of music physically. Almost effortlessly, he changed from one allied genre to another without losing the pace and was best when jumping back from fluffy house and its homoeopathic playfulness into grooving techno.

The Cocoon resident is a DJ like a DJ should be: sensing the right tune at the right time, energetic, music loving and expressing his joy of music physically. Almost effortlessly, he changed from one allied genre to another without losing the pace and was best when jumping back from fluffy house and its homoeopathic playfulness into grooving techno. Funnily enough he was dropping 1-2 tunes that got played the day later by Laurent Garnier live. After having got such a juicy package of energetic techno, sore muscles were already preassigned and walking to the train station next day looked like you can call C-3PO brother. 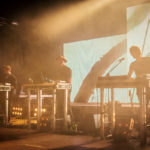 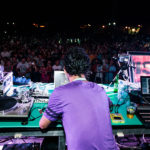 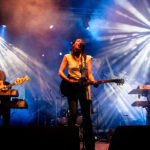 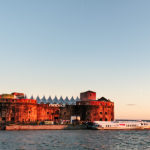