That I ate a fool at the worldwide only city situated on two continents is an open secret. In Istanbul much has changed since my first visit in 2007. For example, after many years of restoration both the Hagia Sophia and the Süleymaniye Mosque shine in a new light. The biggest highlight is still the Bosporus, whose water masses appear every day anew in a different color. This time there was even enough time to visit the small Hagia Sophia as well as other mosques like the one in Eminönü or Kabata.
gallery crop=”true” crop_center=”true” max_side=”100″ quality=”95″ stand_alone=”false” recreate_when_updated=”false”] 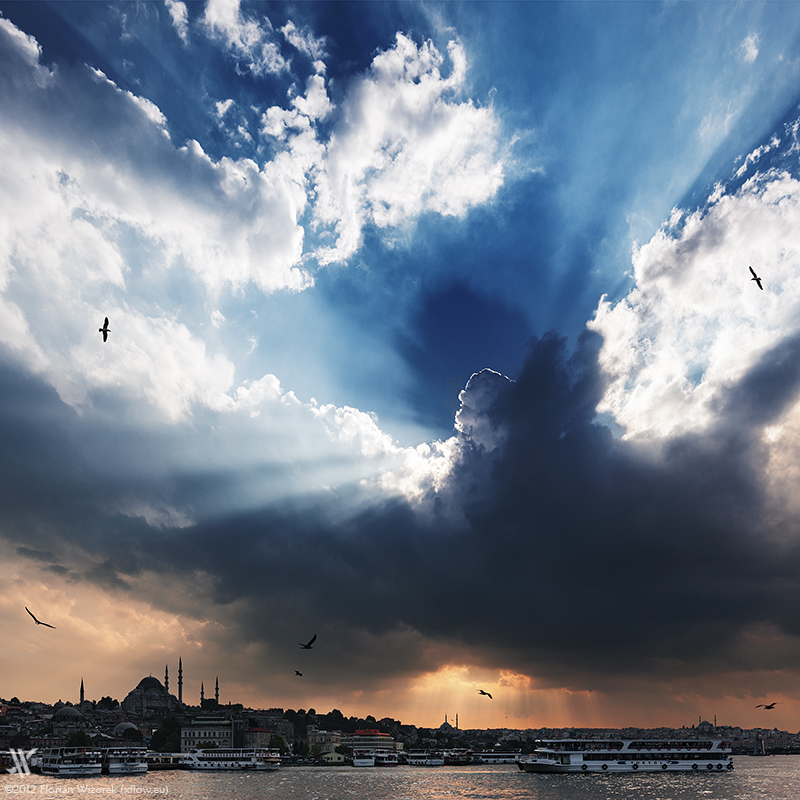 But an evening mood like the one I experienced on 31 May 2012 at the Golden Horn has not yet come to my mind in several stays in the metropolis on the Bosporus. A small storm cloud that rained down over the Süleymaniye Mosque filled the early evening sky with a breathtaking drama. Here you can find my earlier photo and travelogues from and about Istanbul.

The scaffolds around the minarets of the Süleymaniye were already removed last year, but the lighting had not yet been completed and 1-2 jobs on the plaster were still pending. Since June 2012 this most important church in Istanbul after the Blue Mosque has been shining in new splendour.

The scenery is particularly charming when a small summer thunderstorm falls shortly before and the domes of the mosque are reflected in numerous small puddles. But also in front of this mosque the big coaches often stop, so that the Süleymaniye soon has to cope with the same onslaught as the big Blue Moschee.

Not far from the big sister, one finds southeast, if one follows a downhill road behind the Blue Mosque, the so-called little Hagia Sophia. Today’s mosque was built a few years before the Hagia Sophia and originally served as a church until it was transformed into a mosque by Hüseyin Aga in 1504. Only a few interested tourists find their way there, which is why the small Hagia Sophia, in addition to its small artist’s garden, captivates above all with its peace and quiet and a tidy, yet lively interior and the play of light in its dome.

For some time now, the great Hagia Sophia has been a museum that offers the viewer a living fusion of Christian and Muslim elements. Since my first trip to Istanbul in 2007 I unfortunately only knew the Hagia Sophia with a huge scaffold underneath the dome, which of course had negative effects on the lighting atmosphere (here you can find the photos from 2007), but since 2011 the museum is in full operation and attracts visitors from all over the world. The waiting times at the ticket office are shorter than the queue would suggest. In spite of a 40m long waiting distance we only had about 15 minutes to wait.

The district of Eminönü forms the southeastern tip of Istanbul. One of the most magical places is the southern end of the Galata Bridge, where the Vapurs set sail towards Üsküdar and Kadiköy and a multitude of flying merchants try their luck and you can hear 50 “Bosporus! Bosporus! Bosporus! calls per minute while you push a Balik Ekmek (mackerel in bread with salad) somewhere behind your gills. Right there, directly at the southern end of the Galata Bridge, you will find the Eminönü Mosque, which is also called New Mosque or in Turkish Yeni Mosque. A view into the very compact, colourful but quite contrasting church is always worthwhile.

Located directly on the T1 tram line, between the Karaköy and Kabata neighborhoods, you will find the Nusretiye Mosque, also known as Tophane Mosque, because of the name of its own neighborhood. In the almost square interior, one only very rarely encounters western faces and one can enjoy the finely detailed architecture in peace.

So, enough photos of mosques ;-) Istanbul currently accommodates about 13 million people. And then a few cruise ships dock, then all hell breaks loose around the sights. Every minute, the tram T1 takes dozens of people through the city and yet all the wagons are full to the brim every time. One notices the human factor in Istanbul. But the Bosporus has the greatest decelerating potential. It takes the hurry out of the hurry when you sail on the water from Eminönü to Kadiköy or from there to Besiktas. There is nothing better than enjoying these moments with an ayran or small tea on the upper deck of the Vapurs. That’s the number one Istanbul feeling for me.

Whether in the middle of the week or on Saturdays, Istanbul’s nightlife simply doesn’t have a break… The Nevizade, a small parallel street of the Istiklal promenade, is particularly communicative and culinary. No matter how many floors a house has, it is occupied from top to bottom with chattering, laughing, dining people. Begun there, the raki flows in streams and become Istanbul nights laaaaaaaaaaaaaaang…! A worthy end of such a night is a stop at one of the fast food restaurants on Balik Pazari to quickly send a few fried mussels and garlic sauce into the raki-fed stomach.

photo series | The Mosques of Istanbul

Hagia Sophia – The Mosque once being a Church 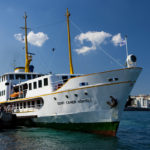