Far in the west of old Constantinople and originally being located outside the city walls a jewel and testimony of early Christianity can be seen, that is the Chora Church. Like Hagia Sophia it was once being transformed into a mosque. Today it is called Kariye Museum and holds the worldwide most historically significant as well as elaborated mosaics and frescos of Palaiologan Renaissance.

The church’s actual name is “Church of the Holy Saviour in the Country”, but quickly it was only remembered as Chora, what means something like “outside of the walls” or “in the country side” in ancient Greek. Originally meant to be a monastery, the church got built back in the 4th century and outside, at the doorstep of Constantinople.

Cities always grow and get more influential. Of course Constantinople didn’t shrink as well and that’s why back in 4th century Theodosius II expanded the city wall – so called Theodosian Wall – further, while also incorporating the Chora Church site. That made the church “move” from out- to inside while funnily it kept its name Chora even until today.

The Chora Church we know today got created back in the years between 1315 and 1321 when Theodoros Metochites, statesman of Byzantine emperor Andronikos II. Palaiologos, restored, rebuilt and endowed the church. He’s also the mastermind behind the impressive interior decoration, that’s showing the world’s most significant mosaics and frescos of Palaiologan Renaissance. His grave is supposed to be located at the northern end of the church.

After the Ottomans seized the city known as Istanbul these days, the church got converted into a mosque, like its larger companion Hagia Sophia. All icons and divine portrayals got concealed, because of the prohibition against iconic images in Islam. Nowadays Turkish name of Chora, that is Kariye Camii, dates back to the Ottomans as well.

When entering the church then order and display of icons quickly reveals that the building was dedicated to Jesus Christ (southern dome) and Virgin Mary (northern dome). The Chora also holds a donator mosaic showing the kneeling Metochites presenting Christ the church. Further mosaics feature Saint Peter and apostle Paul, the journey to Bethlehem, Archangel Michael as well as Virgin Mary’s funeral. 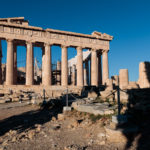