The German capital can look back on a worldwide unique history and of course the city’s constructional countenance gives a very good reflection of that. Against the background of other European capitals Berlin seems to skip a couple of urban development stages. Despite constructional blunders and demolition one of the best history tellers is still around, that is the city’s infrastructure, in particular the underground transportation, its diverse tunnels and various stations. When having a closer look they reveal a stunning piece of Berlin’s chronicles as well as contemporary stories.

The Philosophy: As a far and wide travelled man I kind of had to learn that one hasn’t to see the other side of the world to encounter special moments as often interesting things already happen at one’s own doorstep. The history of the city being reflected by the underground tunnel and stations as well as my personal appreciation for a very good public transportation is the driving force of this dossier. Its photos shall portray and honour that the same way like bringing this story to you, the reader. An “Ey, every morning I am driving that way to work, but I’ve never seen it like that” is the biggest compliment I can get.

The Task: The window between two sequent trains is the only time available to take a U-Bahn photo. At every station the station sign has to be photographed in a standardised way. The remaining time can be used to get an architectonic photo of the platform, anteroom, trains etc. Personally I tightened the task by solely using a 24mm prime lens at aperture f/1.4 without tripod. Despite the time limit the photo should be taken the way that the station appears a little abandoned and without lots of people.

The Law: All photos were taken the way in regard of protecting the personality rights of train drivers as well as passengers. That means no face can be identified. If one of the very few humans can be identified though then this person was always informed about this project and asked if the photo taken can be published. Surprisingly Berlin can be very open-minded in that case.

Some of the photo stories got shot together with my photographer friend Torsten Goltz. He captured a couple of nice underground impressions as well. 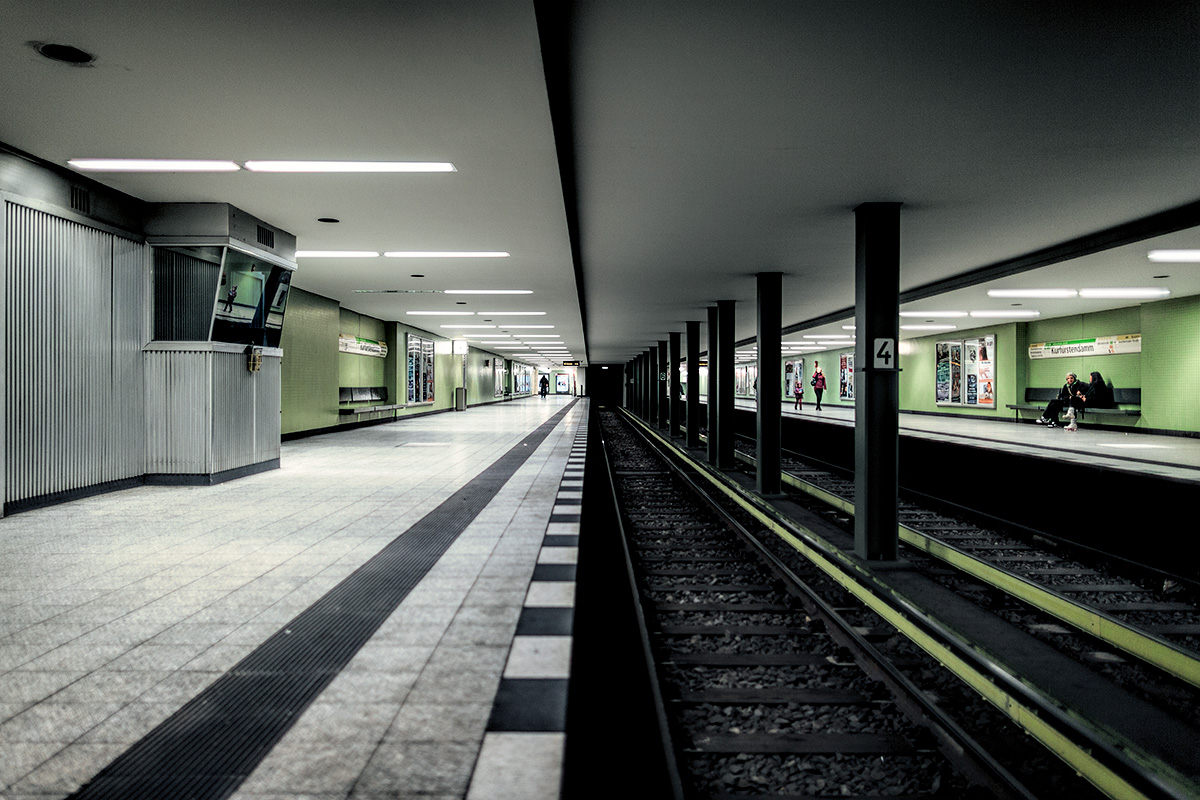 The 8,8 kilometres long U1 line starts at Warschauer Straße station and winds itself through entire Kreuzberg district towards the West, towards its terminus Uhlandstraße station.
The line U2 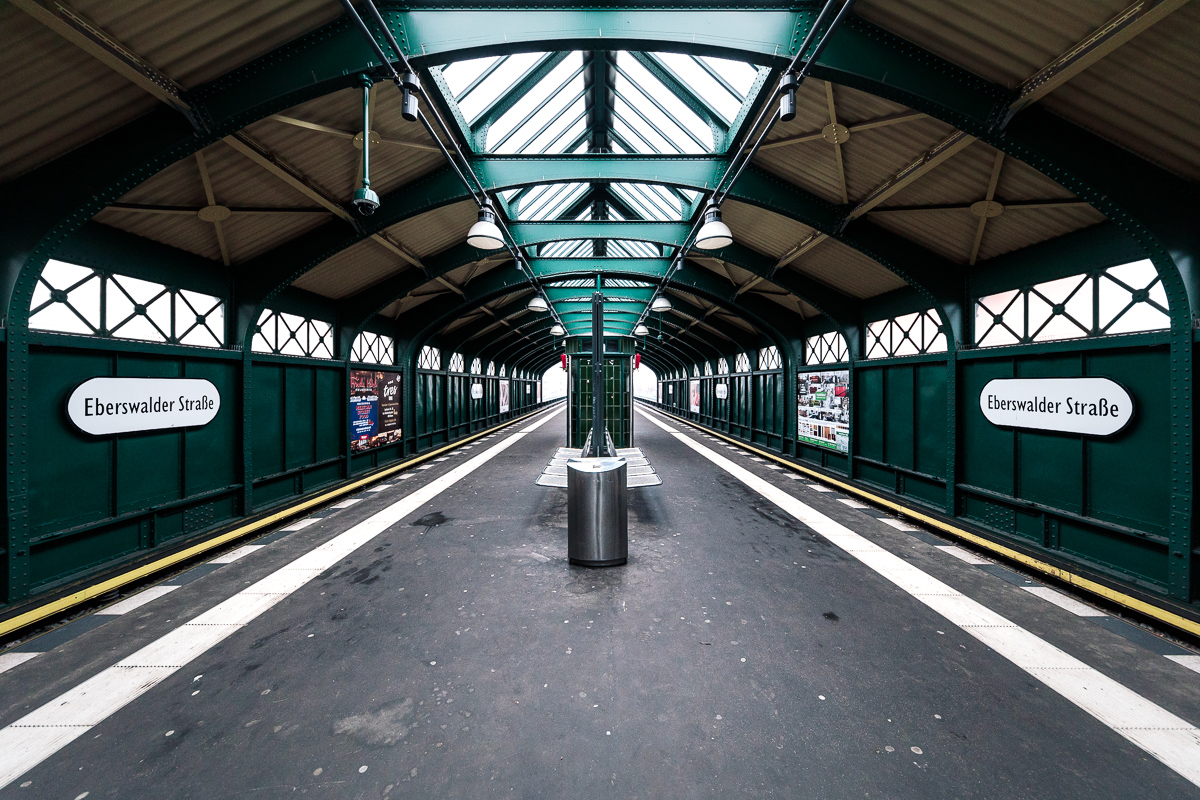 The 20,7 kilometres long U2 line begins in Berlin\’s northeast, in Pankow, and connectes the eastern as well as western city centre to end in Ruhleben, that is Berlin’s northwest.
The line U3 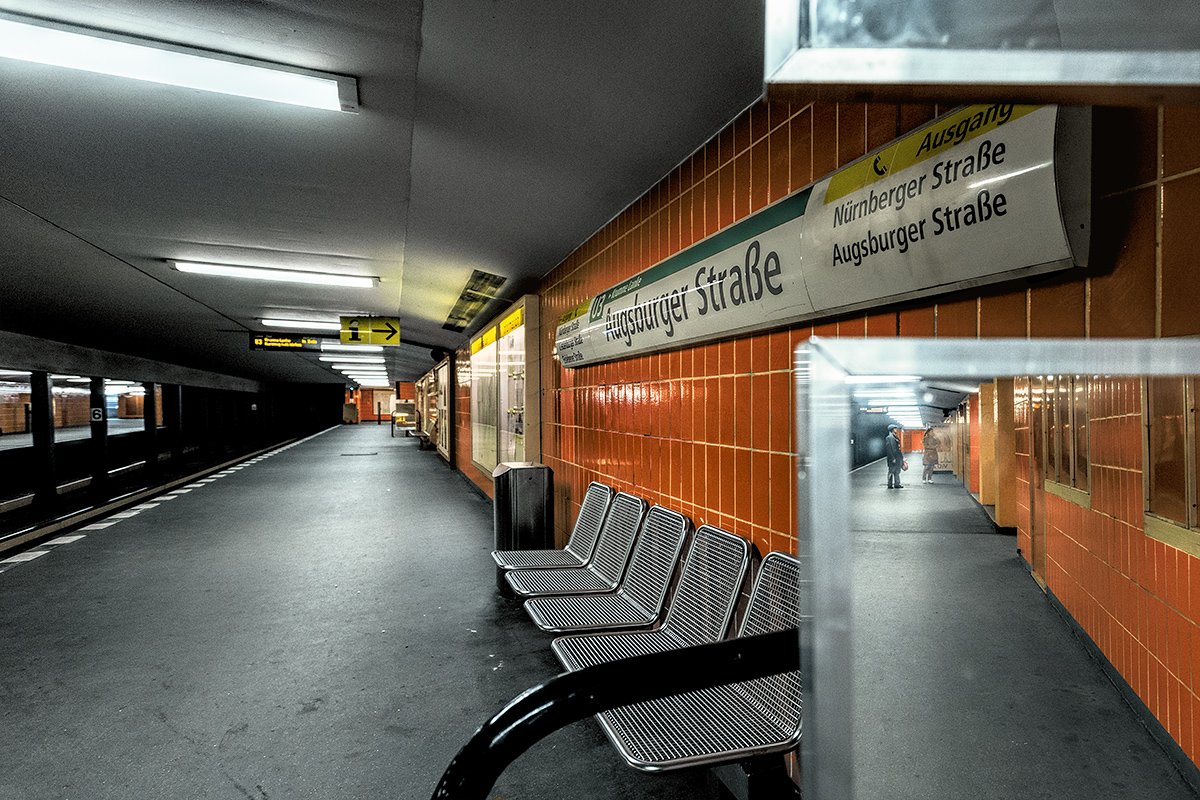 The 11,9 kilometres long U3 line connects the western city centre with the southwestern suburbs and its university campuses; beginning at Nollendorfplatz and ending at Krumme Lanke station.
The line U4 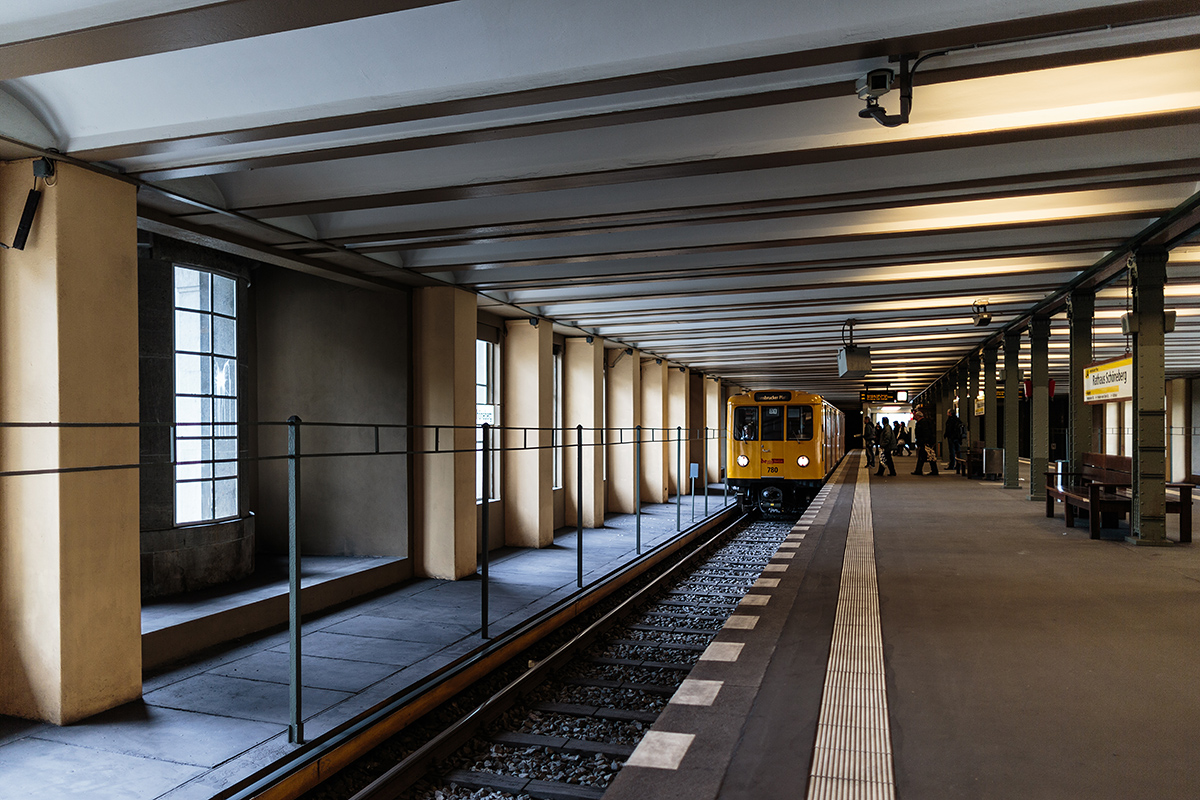 The 2,9 kilometres long U4 line is short and runs within one single district only, that is Schöneberg. It starts at Nollendorfplatz and ends at Innsbrucker Platz, a junction with S-Bahn’s Ringbahn.
The line U5 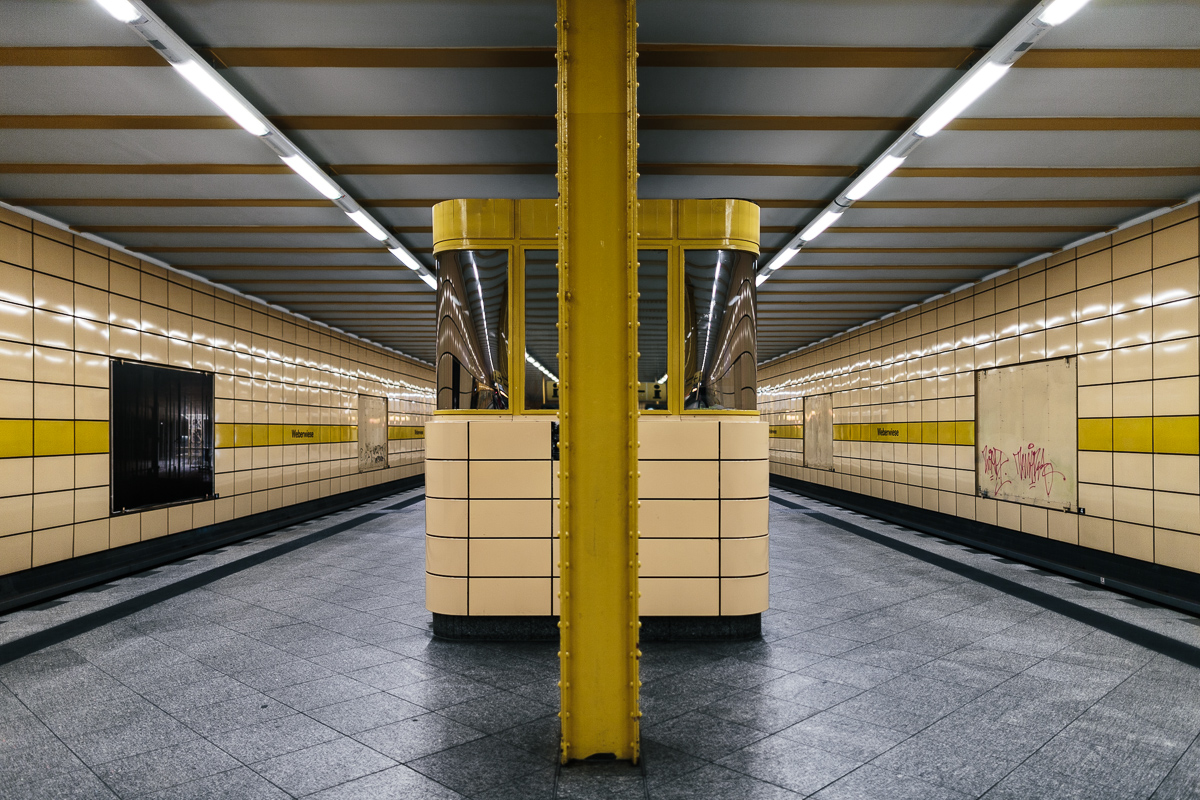 The 20 stations of 18.4 kilometres long line 5 run through East Berlin only. Among all of Berlin’s underground the U5 has longest above-ground route. Its stops have a functional look and lead towards the subterranean transfer cathedral called Alexanderplatz.
The line U55 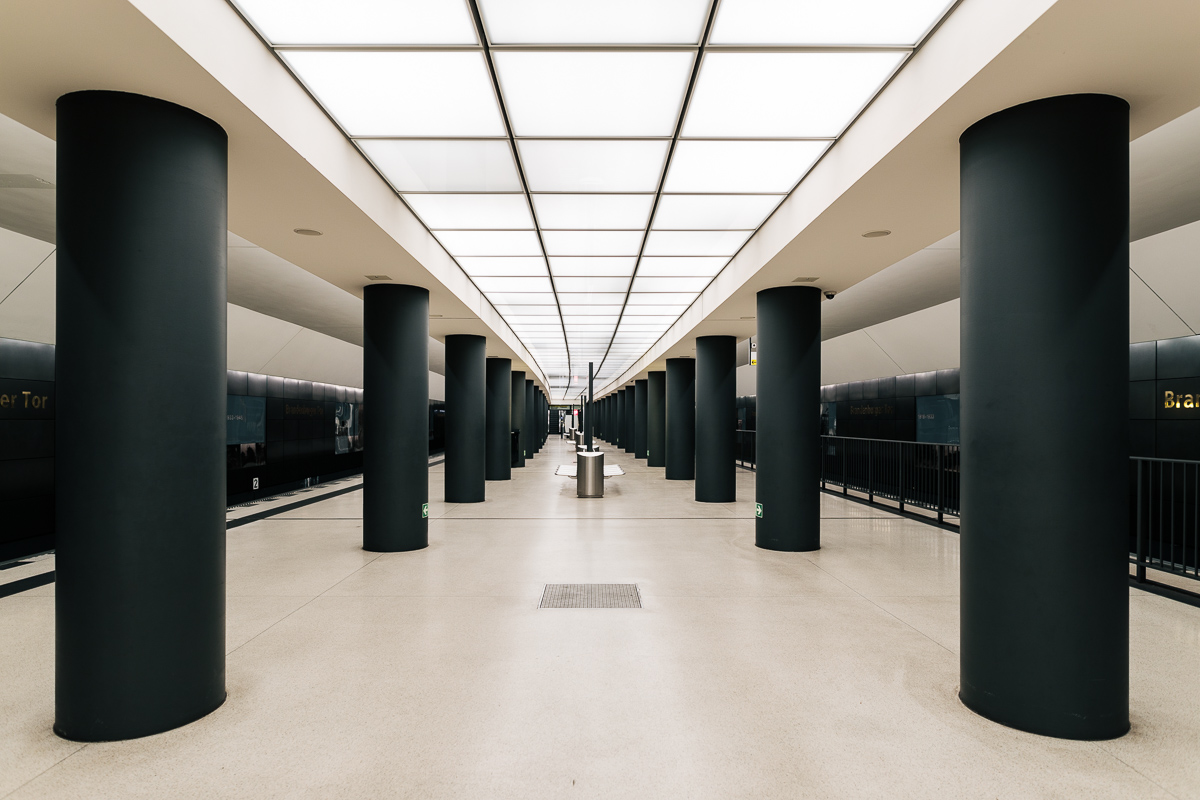 Being solely 1,8 kilometres long, U55 is an isolated from the main network operating extension of the U5. It’s course leads through the governmental district causing Berlin’s to call it as The Chancellor’s U.
The line U6 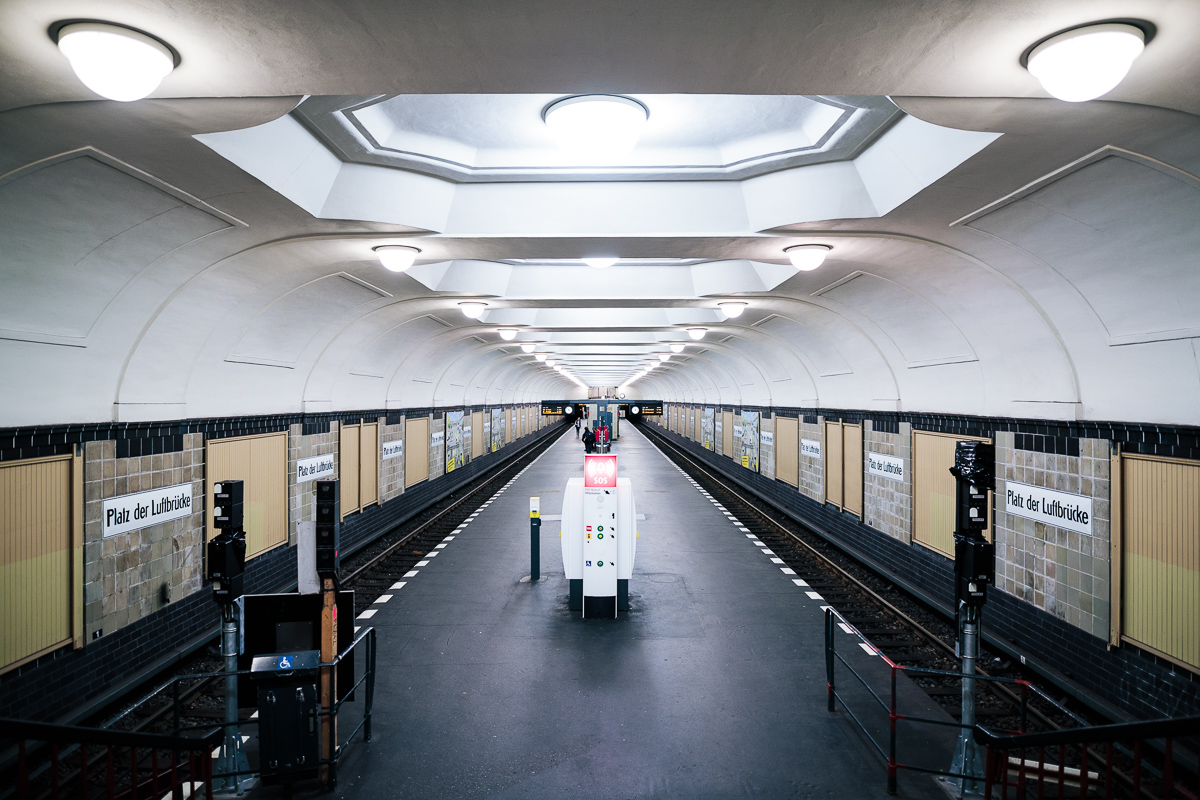 The 19,8 kilometres long U6 line crosses Berlin in classic North-South-manner, from Alt-Tegel to Alt-Mariendorf while connecting important transportation hubs like Friedrichstraße, Stadtmitte as well as the circular railway stations Wedding and Tempelhof.
The line U7 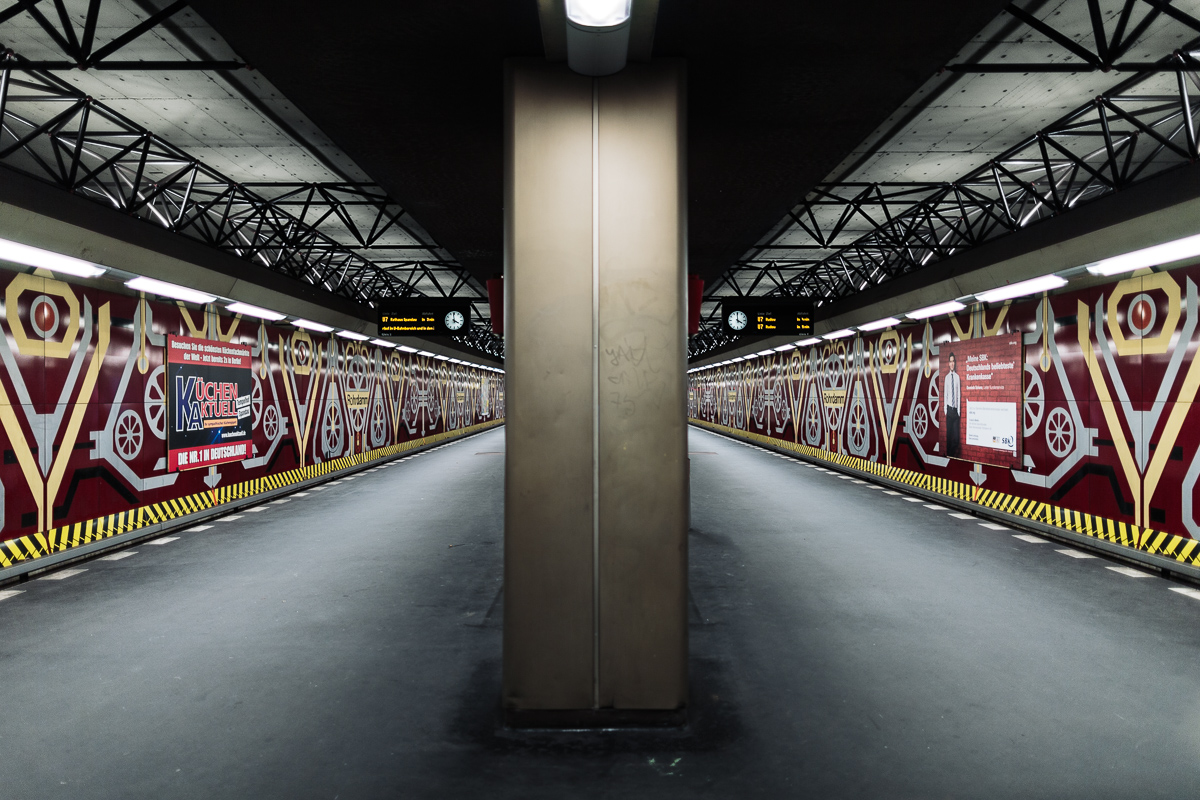 The entirely underground running U7 line is impressive 31.8 kilometres long. Its route leads diagonally northwest to southeast connecting some of Berlin most densely populated neighbourhoods. The U7 is Germany’s longest real underground and has to cope Berlin’s traffic volume.
The line U8 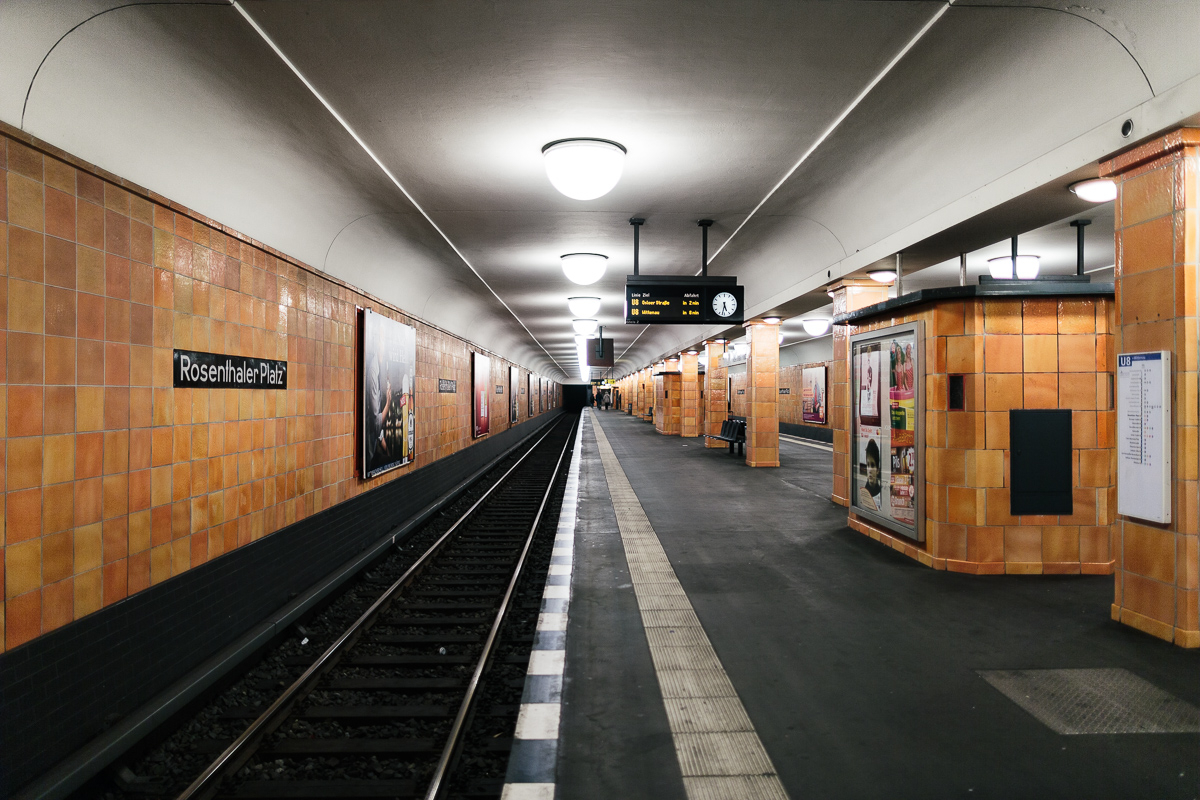 With its 24 stations and 18.1 kilometres in length the U8 line is Berlin’s second North-South connection. Before the Fall of the Berlin Wall it ran underground through the Eastern Bloc not stopping at any of East Berlin’s stations. Today it provides one of the most comprehensive social as well as historical reflections Berlin has to offer.
The line U9 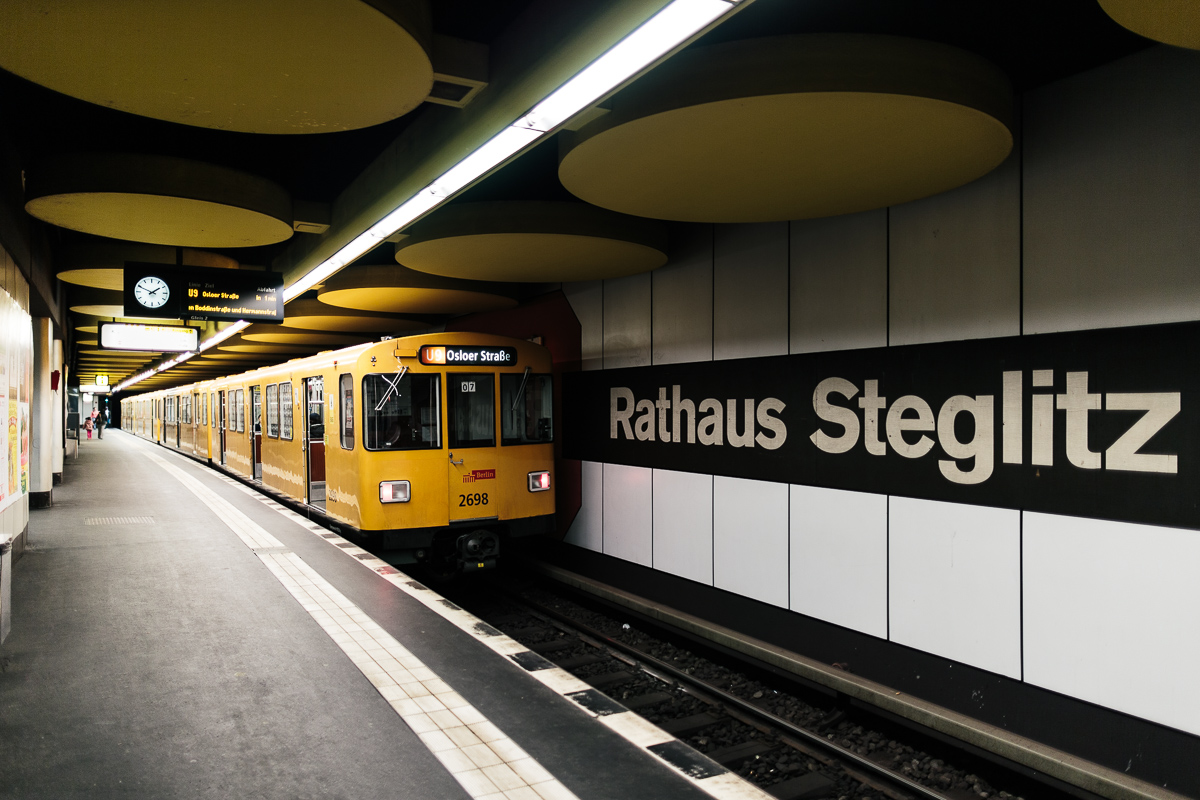 The 12,5 kilometres long U9 line reflects the division of Berlin and runs on former West Berlin territory only. It connects the densely populated districts of Wedding and Steglitz with the western city centre around Kurfürstendamm and Zoological Garden station.