The Tiger’s Nest monastery is the Kingdom of Bhutan’s number one cultural icon. It is located remote, among rocks and clouds high in the sky at 3100 metres and can be reached only by foot. The monastery is dedicated to Guru Padmasambhava, who first introduced Buddhism to Bhutan. It is said he was meditating for 3 years, 3 months, 3 weeks, 3 days and 3 hours in a cave underneath today’s Tiger’s Nest monastery.

In the end we are even meditating ourselves. Therefor our guide and minder Tandin escorts us to a secluded room of the monastery, where we sit in the open window air draught devoting ourselves to the sound of the monks reciting mantras in the far distance as well as being surrounded by the smell of burnt incenses. That moment of solitude is quite needed as the world outside the monastery tourist became a mad house of tourists meanwhile. All we left behind on the way up are now here, searching for the Hideaway of the Tiger. But one by one…

The journey is the Destination

Our climb begins at 7 o’clock in the morning. Having covered the most important first metres in altitude on a horse turned out as a lucky find. My horse pretty much farts its way up onto the mountain like turbine-driven, but that’s how we can escape the tourist rush being kicked off by a Chinese mob just having tipped out two busses. Riding on four-legged friends we may enjoy a couple of moments free of any other tourists around us and one of them is the view of the Tiger’s Nest monastery through the prayer flags hanging at the opposite rock or the pilgrimage of monks having started their way up to the monastery considerably earlier than any other tourist.

Taktshang sits on the spur of a steep rock face rising up more than 3000 metres at the end of the Paro valley. The monastery got built being literally squeezed into the mountain. The walk up starts at about 2400 and leads up to 3120 metres in altitude, hence some 700 metres have to be covered. Actually that’s even more as sometimes the path goes 100 metres down and then up again. That up and down happens at an altitude where oxygen content becomes so low that most of the tourists rather gasp themselves up to a monastery having opening hours and a lunch break.

Once more I thank my horse and my

All that glisters is not Gold

After having reached the Lion Cave, a small temple near a waterfall, the gates of the Tiger’s Nest aren’t far away anymore. Up there everyone has to hand over anything being carried onto the mountain, in particular any kind of camera or smartphone as inside the monastery is a total and strict ban on photography, like in any other of Bhutan’s sanctuaries as well. Only eyes and ears may witness the place that is dedicated to meditation since the 8th century. The actual monastery building got built back in the 17th century after the war between Tibet and Bhutan has ended.

The Tiger’s Nest Monastery looks on the sunny side of life, that is the south, and in particular in the morning as well as noon hours photographers can only produce boring backlit images having a high dynamic range as well as dull depth effect. Of course one may climb up to the monastery in the afternoon, to have better light condition, but then the opening hours of Tiger’s Nest will tackle a further leading visit, as well as the inflexible schedule most guides have to stick to. One has to be Indian, as those are the foreigners being allowed to move around freely even riding a car.

In the end I get a terrific photo though. On the way back into the valley I notice a couple of wonderfully coloured Tibetan magpies, or Himalaya magpies. Because of their plumage, long tail as well as lovely call they rather remind of a bird of paradise than the black-white cawers from Central Europe. One thing they have in common though, and that’s their interest for glittering. And that’s how I face a moment of pure, sad, shocking contrast, when the bird eats carelessly thrown away tinfoil in a country merchandising itself as pure and immaculate, in particular when it comes to nature. Humans are a disgrace to this planet. Of course I take away that rubbish. 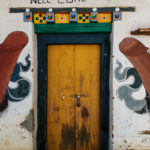 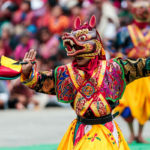