Nepal’s Mardi Himal Trek takes hikers to the feet of the staggering Annapurna massif and up to an altitude of almost 4.500 metres. The air becomes literally thin where firmament and clouds shake hands and rocks break through the sky creating staggering mountain panoramas as well as the simply stunning backdrop for stars and an unbelievable night sky. Yet hikers have to survive an army of leeches waiting in the forest.

Step by step onto the mountain

Somehow my left armpit’s burning. First I am suspecting the “quality” of my Made in China plastic poncho, what I have to pull over every now and then as our hike leads us through a precipitation carrying cloud again. The itching burning just doesn’t want to stop, hence I have a look finally and spot a leech indulging itself in sucking my blood, but let’s take things at their time…

We start in Pokhara, the famous town having the mountain panorama and massif of Annapurna in its neck. Before we had to deal with a 10-hour bus ride on Prithvi Rajmarg highway to cover the 170 kilometres between Kathmandu and Pokhara though. Having our final stop Pokhara welcomes us with quite some changing weather; an omen for the next days to come. Our actual hike starts at the Ghatte Khola bus stop where the road from Pokhara to Baglung ends. From there we take on the first leg to villages Dhampus and further on to Pothana.

Back in 1961 Englishman Jimmy Roberts was the first summiting Mardi Himal. Compared with other Himalaya giants its 5.588 metres in altitude appear rather like a hill and since its rock massif is part of the almost 7.000 metres high Fish Tail’s Southwest ridge, that is the Machapucharé, one may even not perceive Mardi Himal as separate mountain. During the whole Mardi Himal Trek hikers will see the summits of 7.219 metres tall Annapurna South (also called Annapurna Dakshin), Hiunchuli as well as distinctive Machapucharé.


Our hike is quite characterised by rain, hence I leave the big camera baby where it is and capture forest image with my smartphone only. Such omnipresently wet it is…

We stay overnight in Pothana, where we can also hide away from the ever increasing rain. It’s literally bucketing down on hikers arriving Pothana only few minutes after us… Surprisingly there’s WiFi up here, hence all guides play absentmindedly with and on their smartphones. Pothana offers great food and my dearly beloved Masala Tea.

The morning after clouds allow to see the summits of Annapurna South, Fish Tail, Annapurna II and even Lamjung Kailas. The couple having spent the night next door sees them for the very first time since having started their trek 7 days ago as the whole time they were surrounded by rain, rain rain and clouds, clouds clouds… It’s breakfast time now and we’re eating like a horses as hiking definitely demands its calories.

On our next leg from Pothana village to Forest Camp things become bloody as the trail is spangled with leeches waiting for victims in the vegetation along the way. If one stops then one can literally see how all things around start moving as those bastards smell their meal. We literally run up to the Forest Camp as any pseudo-itching or -burning makes head and phantasy go crazy. The forest is humid, hence ideal terrain for those parasites to live. The humid forest also means perfect living conditions for countless little, often magically appearing mushrooms.

The enchanted appearing Mardi Himal forest offers more than 120 different rhododendron species a place to live. One gets instantly kicked back to reality when seeing plenty of garbage along the way, when hiking through the muck being left behind by Snickers & Co. It was labour of love to me to clean the forest, pick up that filth and dispose it back in civilisation. It is very ironic that littering in the Annapurna Sanctuary is common and not punished, whereas flying a drone is treated like the most severe crime on the planet.

The mighty Annapurna I with its 8.091 metres in altitude can be seen from the Mardi Himal base camp only. However, it doesn’t really matter if eight-, seven- or “only” six thousand metres tall: it is unbelievably impressive to stand in front of a mountain that’s breaking through the clouds and even piling up some further kilometres into the sky. Also it is most admirable to see that large vegetation dares to grow up to 3.000 metres in altitude.

Mardi Himal Trek is a simple hiking trail but also not harmless. Not because of the thousands of leeches seeking for one’s blood, but because of hikers disappearing. At the Forest Camp we come face to face with that when a group of Nepali men gave up the search for a group member’s wife. At the Low Camp we see the wanted poster of a Dutch woman who has disappeared as well. We see her photo a few times along the way up to the mountain.

Having reached the high camp, we can take the first photos of the beautiful mountains. But over here air becomes really are…, and nights are not really relaxing as breathing becomes so shallow that one has to gasp for the few oxygen being available. Quite some tourists get problems from that, as symptoms like headache, bad mood and dizziness show that they took on things all too fast. Since the summits around us became consumed by clouds again we decide not to ascend further and stay at the camp for acclimatisation. At night we’re allowed to see a tremendous star sky and may capture wonderful images of the mountains becoming apparent against the background of Milky Way.

Situation and climate at the high camp becomes more frosty, in particular when the wind freshens up and the clouds and their humidity pushes in. Even vegetation seems to be brassed off by cold conditions up here as living conditions are really Spartanic. Basic beds, basic rooms and we’re so happy having dragged up our own, warm, clean sleeping bags onto the mountain as we spend 3 days at the high camp. Each morning we enjoy how little winged friends celebrate and enjoy the sun’s arrival, when the warmth sweeps away the chilliness.

Watching sunrises up here and catching them photographically isn’t a big thing. Being backlit the rock giants appear cold, black and rugged. Much more interesting would be to see them at sunset, however that’s quite impossible as the wall of clouds doesn’t permit the light to break through. At the latest at 8 o’clock the morning magic has gone completely, when the clouds push in and one may only see some 50 metres far. Then things become very wet, cold and windy.

After three days we get ants in the pants and want to go down again. Also because the low air pressure caused my teeth to ache. Back in the valley that thin air caused pain has vanished, into thin air. The way down to Siding village is extremely steep and a little torture. Not because the leeches but more than 2.000 metres in altitude we had to cover in one day.

Having reached that village we’re lucky not to stay at the dirty mouldy Hotel Trekkers Home Nepal but in a lovely eco home stay next door that turned out to be a wonderful retreat. Life over here, in and with nature, is just wonderful. On the way back into the valley I got chased down though. Biting my calf, a leech somehow made to suck itself completely full with (my!) blood and I didn’t notice that at all… Well, now it doesn’t need dinner anymore for the next 2 years. Those beasts can become up to 30 years old and leave a hell of a bloody mess behind, due to their blood clotting’s antidote. I notice its work only being back in civilisation, back in Pokhara. 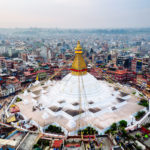