In the East of Kathmandu, where the entry lane of the airport meets the large Boudhe East-West road, one of the largest Buddhist places of worship rises up: the Boudhanath Stupa Jarung Khashor. Its vibe becomes literally tactile in particular in dusk as well as dawn hours, when pilgrims celebrate the Kora, the clockwise circumnavigation.

One of the largest Stupas in the World

It is early in the morning the usual madness on Kathmandu roads looks as bleary as the countless faces in the busses driving past us. They are chock-full with people and jolt along the large muddy way that once was the Boudha Road. With all those hundreds of very slowly moving cars it looks like a Middle East warzone after the U.S. tried to export freedom and democracy, but it’s likely still the devastating 2015 earthquake’s aftermath.

It’s not really nice where our taxi driver suddenly stops to drop us. To the left as well as right side we can only see despicable concrete houses. Receiving the first money of the day, he prays to a Hindu idol glued to the car’s sun shield.

He points to a small crowded lane leading through house facades. We can see only Nepali and Tibetan head. We follow them as the curtains of heads lifts to reveal the magic Boudhanath Stupa.

And there it is. Hidden between wonderfully restored historic houses and piles up some 36 metres high into the sky above Kathmandu. It is one of the largest of its kind and got luckily rapidly restored after Kathmandu got hit by the devastating 7.8 earthquake back in 2015. The stupa gets circumambulated not only clock-wise but virtually all around the clock as well. That bustle is most intense at daybreak and in the evening. And now, only few minutes past 6 o’clock in the morning we are the only western looking tourists among the pilgrims.

Having barely entered the circular square around the Boudhanath Stupas we instantly feel the peaceful, spiritual but yet concentrated atmosphere. We join the stream of people walking around the stupa. Of course in a clock-wise way as the opposite would be highly disrespectful.

Pilgrims from all over

This morning a strong east wind throws large leaden low cumulus clouds towards us. Even the tropical sun, usually singeing down on us, battles hard to make it through them. That sort of weather makes Kathmandu’s smog visible and doesn’t even inspire the hundreds of pigeons living at the stupa to fly out of their roof beds. The stream of pilgrims circulating around the stupa doesn’t care about that. Being deep in thoughts as well as worship they turn each prayer wheel.

Tibetan Buddhism doesn’t know borders and gets cultivated in the area between Lhase, Nepal and Bhutan. Hence it’s no surprise that some wayfarers around us come from very far away. They pilgrimaged hundreds of kilometres and even had to cross the giant Himalaya mountain range. A real pilgrimage doesn’t mean simple walk only but also to throw down oneself lengthwise to the ground every 4-5 metres walked plus living very very abstinent.

The square around the stupa becomes busier and all the shops start working. They start to arrange their display of goods, that is mainly handcrafts. Also the temples open their gates as a giant gong sounds. They send out large fumes of burnt incenses to propitiate the gods, make people feel happy and stimulate enlightenment.

Suddenly a large squadron of pigeons rushes through the incense fumes. They go for their first spin of the day around the hat-like Buddhist shrine. They even land on it, either directly on the golden bonnet or on the whitish dome. Visitors may dedicate the dome’s yellow stripes to the birds being famous for their remains, but having a closer look reveals that they are simple saffron coloured bows.

The vibe at the stupa is literally perceptible by all senses. It is positive, emotional, spiritual and doesn’t give the bustle in the streets a chance to take over. The walk around the stupa music gets soundtracked by monk chants and Tibetan music emerging from the shops as well as temples. That setting instantly awakes memories of another metaphysically similarly captivating place, that is the Golden Temple of Amritsar.

All in all we visit the Boudhanath Stupa four times and admire this place while we sit on the surrounding roofs to have breakfast or dinner. Also the Himalaya coffee being sold in the stupa’s vicinity won our hearts.

Someting that’s taking place in the morning as well is the feeding of the poor. Many of them are very old. Humble and thankfully they are sitting on the benches are the stupa. Most diverse people approach them and donate food. If there’s food then dogs aren’t far away as well as they ensnare the poor. Ensnared until someone else comes to ensnare, having other intentions though: that is the security. They chase away the poor before 7:00 o’clock, before the western tourists come… 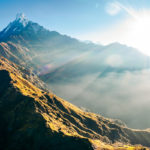