Kamchatka (Камчатка) needs no further introduction for people playing the board game “Risk”. It is the tail at Russia’s Far Eastern end, an appendix of the Eurasian contintent kissing Bering Sea as well as taking Pacific Ocean and the Sea of Okhotsk by the hands. It is the very same offshoot of Russia that made Alaska’s gouvernor Sarah Palin considering to be an expert for foreign affairs. Kamchatka is rough, mountainous and authentic, is almost impassable as well as pretty remote. Attributes undoubtedly being capable to prompt the next photo session of topless Vladimir Putin.

More than 50 years Kamchatka was a restricted military area and even Soviet citizens needed a special permit to enter the peninsula. More than 50 years Kamchatka was top secret and everything approaching without notice got shot down, like for example a jumbo jet of Korean Airlines. Since 1990 that inglorious episode of hospitality is over now and everyone is allowed to explore Kamchatka. Most attracting ist its spectacular landscape with more than 160 volcanoes spread over 800km and currently 30 of them are kind of active. Its remoteness takes its toll and drawing a parallel between a Rolls Royce and a Kamchatka travel as speaking out loud both words already costs money. The following stories emerge from hiking through the Russian peninsula between regional capital Petropavlovsk-Kamchatsky and the fire mountains, a travel that fortunately didn’t become all too expensive as to some extent local photographer Denis Budkov helped to get to the most interesting places. 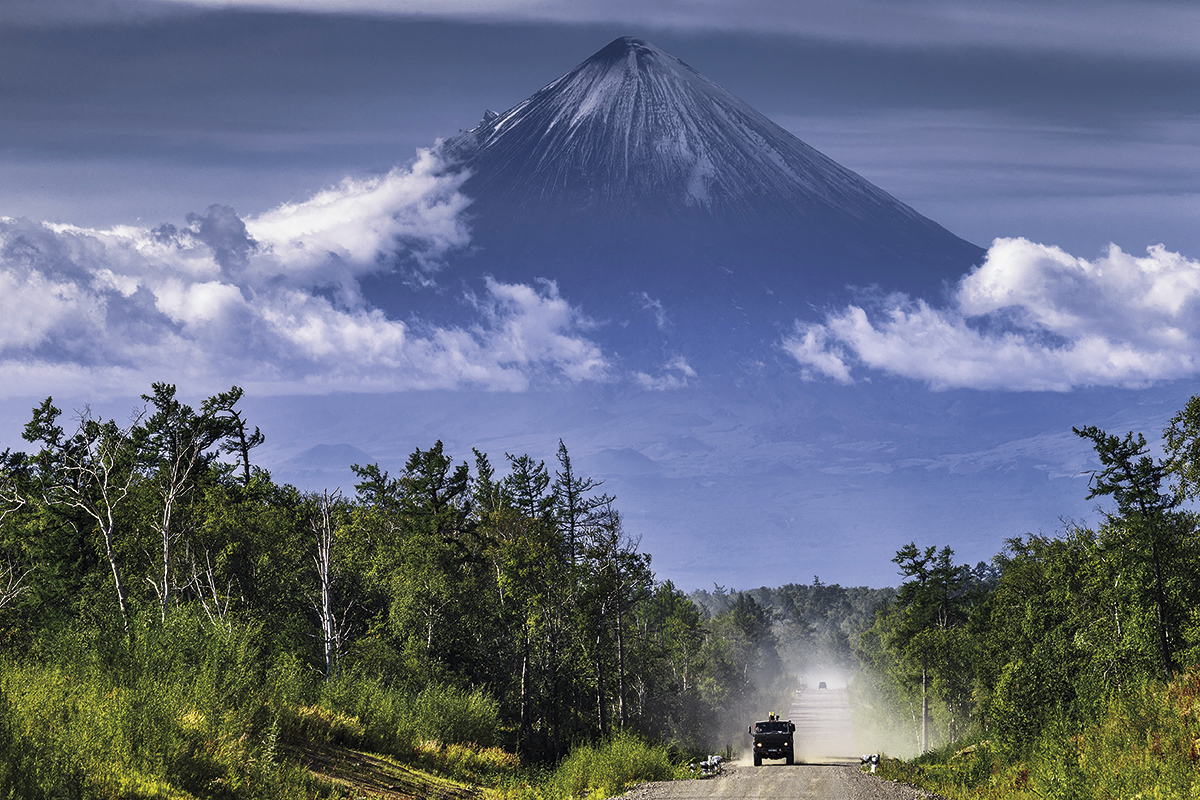 With the Kliuchevskoi-Bezymianny volcano complex Kamchatka’s North accommodates a volcanic system being that large and prominent that even from space it would be visible to the naked eye. Impressive names like Kliuchevskoi, Shiveluch and Tolbachik stand for snow covered and dramatic volcanoes scratching even at the landmark of being almost 5000 meters high. Its bulky but majestic appearance captivates and leaves you behind speechless.
Ice Caves and Fumaroles 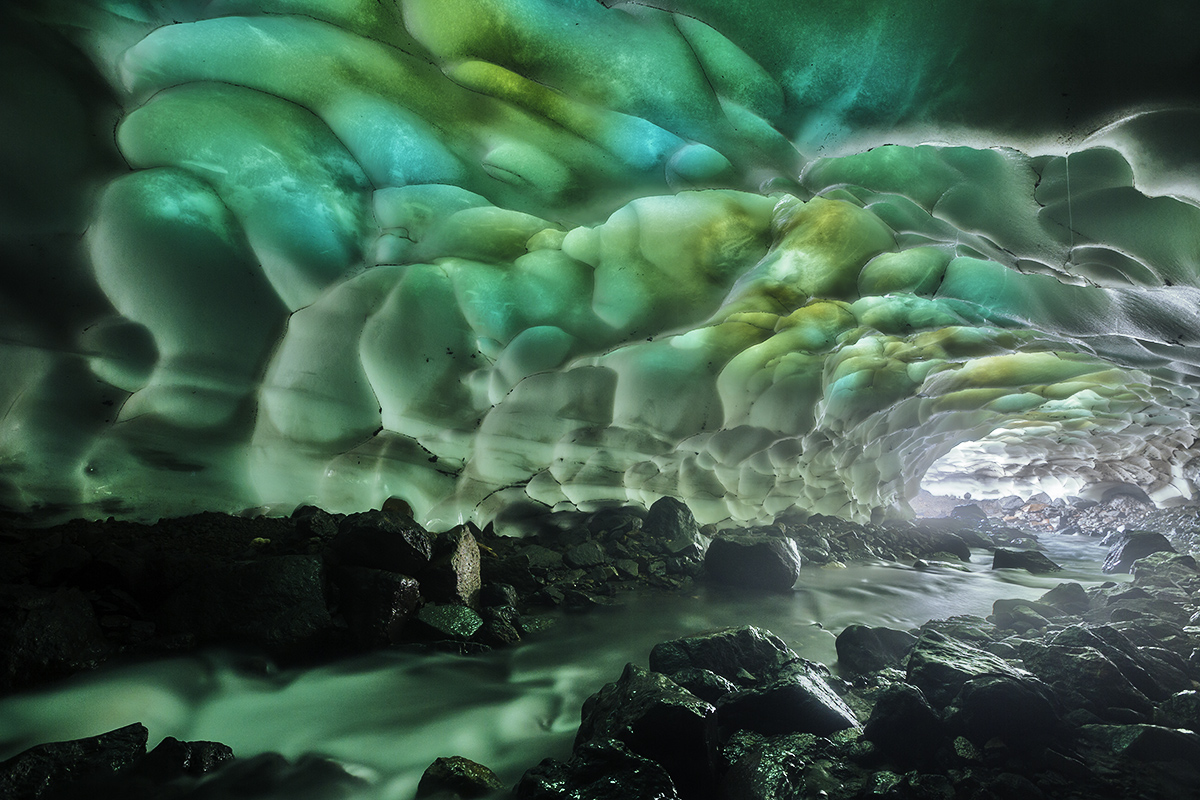 Kamchatka’s South is not less volcanically interesting than the North. Already approaching the Far East peninsula is pretty impressive when landing in Yelizovo, a suburb of regional capital Petropavlovsk-Kamchatsky, among a volcanic guard of honour. Being located only a stone’s throw away from the most populated area many tourists take the chance to visit the volcanoes Goreli, picturesque Vilyuchinsky and Mutnovsky.
Link collection, including Tolbachik eruption 2012 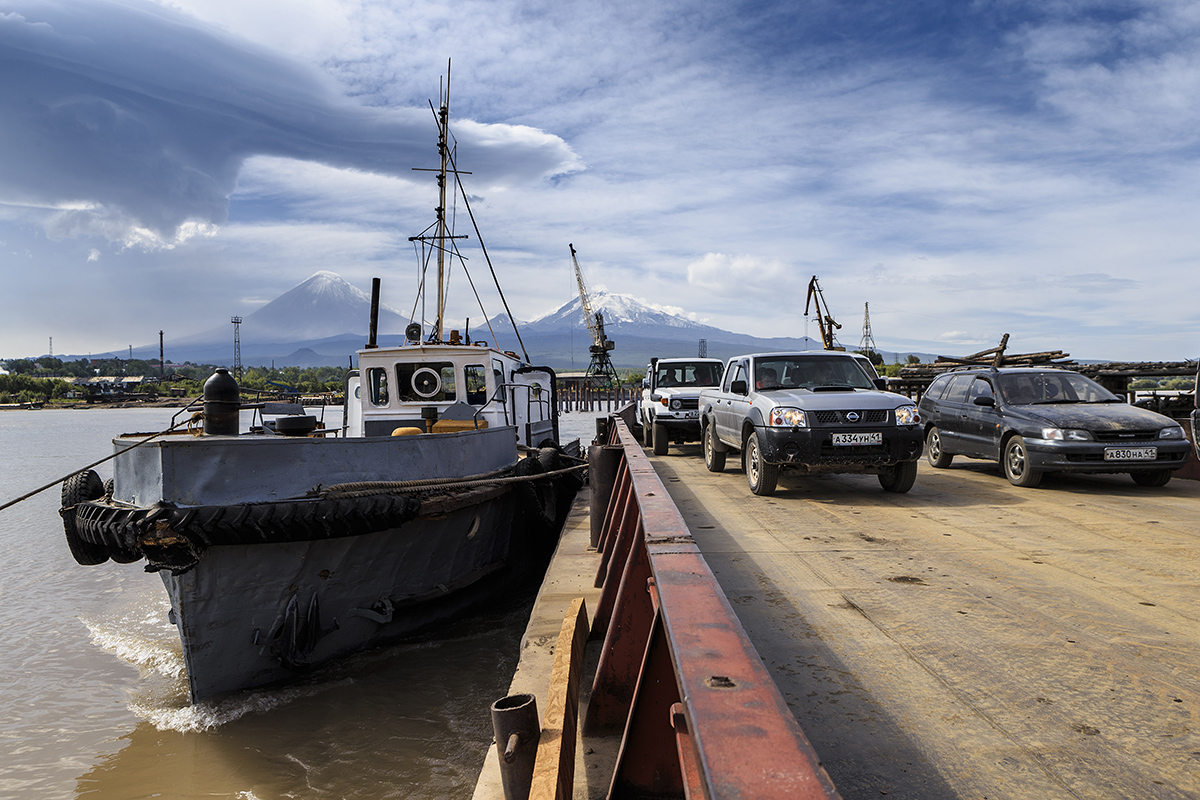 Interesting and informative links featuring Kamchatka, as well as a collection of links of photos and videos of the eruption 2012 at Tolbachik

Shiva’s Empire of Contradictions – An Eye on North India